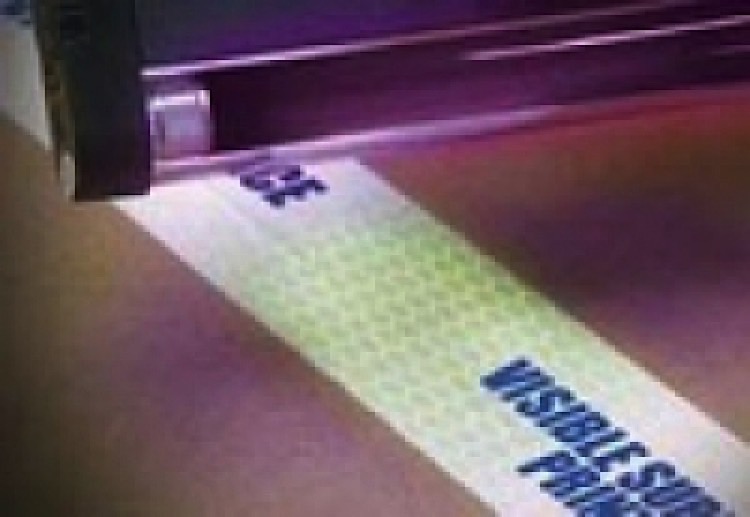 Does it suggest that I'm insecure if I have never done a Print Tip about security printing? Maybe. So I sought out a fellow Tweep (a mutual Twitter follower) to shed some light on just one type of this specialty. George Righter is President of RighterTrack in Washington Crossing, PA (what a gorgeous area, by the way). His site is www.RighterTrack.com.

Security printing is a specialty. If I were playing the TV game "Password," here are a few clues I'd give to get my partner to say 'security printing!' - passports, checks, drivers' licenses, ID cards, stock certificates. It's a broad field, and we can't cover more than a slim example in one Print Tip. I asked George some questions about one kind of security printing: tamper evidence.

MD: George, can you name some common products or applications where tamper evidence plays a big part?

GR: Tamper evidence has become more prevalent today, and we can see it just about everywhere we look. Your examples above are for anti-counterfeiting and non-duplication measures. Another “hot” example of this at this time is a doctor's prescription with an anti-copy, non-forgery feature. Some other applications include packaging and how it is printed and/or sealed, seals to alert you if something has been opened or tampered with, and really any place that requires evidence that tampering or forgery has occurred.

MD: What kinds of printing processes are used to enhance tamper evidence? Is special equipment or materials required?

GR: Most of my offerings were developed on flexographic presses. This is required for some of the advanced features, such as a leave-behind graphic message. While most people associate tamper evidence with special materials such as VOID films, brittle films, and holographic foils, the good news is that there are some simple tricks or tips that most anyone can implement by utilizing their existing equipment and processes.

One simple example is to incorporate tamper evident or anti-cut patterns onto the print layout. No special inks are required for this. The purpose of this for pressure-sensitive products, such as tapes and seals, is when the printed material has been cut, if an attempt is made to seal it over with clear tape, the pattern will have to be re-aligned, which is very difficult. Typical anti-cut patterns involve diagonal line printing, simple text and logo printing, or a hybrid of both.

In the case of anti-counterfeiting and non-duplication, a standard dark metallic ink or dark ink design can be printed, which shows up as black when photocopied. As an added layer of security, serial numbers can be imprinted as well. While the serial numbers themselves do not prevent forgery, they enhance security with tracking and audits. For example, a doctor's prescription dated March 10 would have certain serial numbers or codes assigned to that month or day of the week, which would be unknown to the patients. For those who need some higher end features such as incorporated holographic printing of some sort, there is always the option of purchasing then affixing holographic labels to forms, papers, etc. Unfortunately, we do not have the space here to go into detailed holographic printing, which we may cover in the near future.

MD: So far you've described printing with standard inks, right? Are there other types of tamper evidence printing where regular inks won't do?

GR: When people try to defeat tamper evident packaging, they typically cut it then reseal it over with a clear tape. An added layer of security involves imprinting the material with a silicone, which negates sealing over with adhesive. This is most common with carton and bag sealing tapes. There are also some thermo-chromatic inks that show evidence if heat has been applied to the seal. This helps to defeat the trick of using a heat gun to remove then reapply a seal. When heat is applied the invisible ink turns red to show evidence of tampering. Note that there are different temperature “tripping” inks.

Another simple security feature is to print with an invisible, or UV, ink. These inks are typically white, so they work best on white materials. A logo, lot number, or text can be imprinted, and the imprint will only appear when a UV light shines on it. This can help negate instances of counterfeiting and forgery, and it can also show if tape or seals have been cut and realigned. Of course the trick here, as with any security program, is proper two-way communication of everyone in the distribution chain. For example, the folks at the receiving end need to be aware what to look for. When they receive a shipment they can randomly shine their UV pen light onto the packaging, tape, seals, or paper. At that point they can confirm lot or serial numbers are proper, or they can confirm that the item has not been cut and resealed by viewing the “invisible” tamper evident print pattern under their UV light.

MD: What kinds of measures do security printing firms have to take? I picture armed guards standing near the finished products. Do you have to take special measures when hiring employees? Are there special QC processes as well?

GR: Internal security measures really depend on the account and the level of security required. I’m sure if an order can justify it, armed guards are not out of the question—let’s just hope the armed guards are honest! Hopefully, security companies are carefully scrutinizing employees before hiring them, and even during their work tenure. Employees can sign a “contract” that specifies immediate termination and legal action, if they decide to partake in any shenanigans. However, in most cases, security cameras are easy to implement and are no longer cost-prohibitive. There are even web-based systems that allow an owner to log on and have access to the company cameras in real-time. Besides cameras, items can be placed in a locked or caged area, which is what companies do for pharmaceutical label printing.

Thanks very much, George, for your interview with me on security printing. I'll see you on Twitter soon. By the way, you can follow George on Twitter, too. He's @RighterTrack.

©2010 Margie Dana. All rights reserved. Used by permission of author.