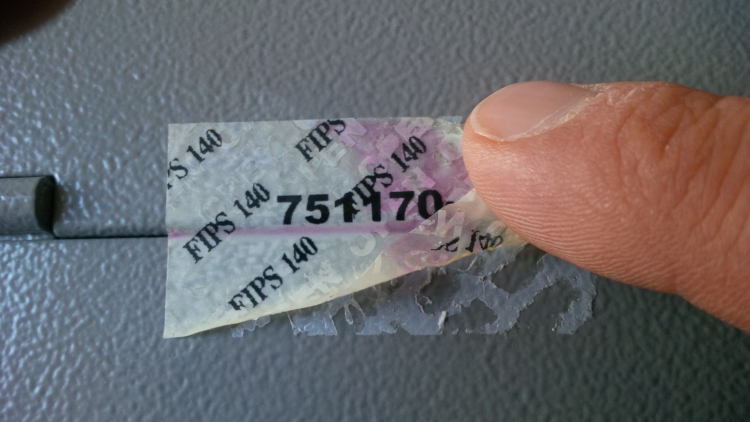 Nearly every week I receive phone calls from companies who require security seals that are FIPS-2 compliant. Typically, they have a product pending shipment that has been placed on hold, until proper seals can be sourced. In a lot of these cases, folks purchase “FIPS-2 Approved Seals” from on-line catalog houses. Then at crunch time, they learn that what has been purchased isn’t adhering properly to their substrate.

The caller is typically in panic mode, and they ask me to send “Certified FIPS-2 Seals” ASAP. Then I have to explain that the FIPS testing labs can only approve seals that have been tested on the actual substrate (surface area). In other words, just because we offer security seals that have been approved by several testing labs, this does not mean that the seals will function properly on every substrate. In fact, anyone who says otherwise is simply being untruthful.

Back in 1998, one of the major Router companies asked me to help them with their FIPS-140 certification. Their router substrate was a powder coated, textured metal, which was an extremely difficult substrate to adhere to. With the proper film and special, patented adhesive combination, I was able to come up with a proper solution, which has been in place since that time.

Then prior to 2010, the FIPS certification evolved to FIPS-2, where we had to then incorporate a heat indicator. This tamper evident heat sensitive indicator triggers to red, when the seals are heated to 150F, negating softening the adhesive with a heat gun.

If you are reading this you may be tasked with sourcing FIPS seals. RighterTrack is knowledgeable about various substrates, adhesives, and tamper evidence, and can recommend a FIPS testing lab if required. Rightertrack can help get you where you need to be, in a hurry, and has over 1MM approved FIPS seals in use around the globe.