Made In USA or Made in China: Does It Matter?

I consider myself a patriotic American. Respect for the flag, respect for our soldiers, respect for our Constitution, and perhaps most importantly tolerance and respect for others. Whenever possible, I try to purchase goods that are made in the USA. However, the new global world, coupled with the US’s prior shift away from manufacturing begs the question: does it even matter anymore? With the current state of the US and even global economy, local job creation is the buzz word of the day. Outsourcing or offshoring, once desirable due to its cheap labor, is falling out of favor. Labor unions in China are demanding more pay for workers, which is raising the labor cost. And of course the high price of fuel adds to the final cost as well. So now, we are starting to see a shift back to the US for some firms.

Where were your sneakers made?

There seems to have been a shift from sneaker manufacturers making product in China to Vietnam. New Balance has been making sneakers in the USA for several years now. I purchased a couple pairs over the years, but found that my feet prefer Nike. So, while I am patriotic, I also have to do what’s best, or select what’s most healthy or comfortable. My current sneakers were made in Vietnam; so right now, and this wasn’t really the case two years ago, we seem to have a choice if we want to avoid the Made in China labels.

And why shouldn’t we support Chinese goods?

Well, some of us feel that stealing intellectual property, pirating, spying, hacking, and historically showing a poor human rights record, should no longer be rewarded. I’ve actually had Chinese outfits copy and paste from my site verbatim. Even though the Chinese population is 1.3 billion, compared with our 300 million population, China still needs us—and they need the US more than the US needs China. The main problem with China is that the gov’t takes ownership to any ideas or property it so desires. This cuts down on any incentive to create and come up with new ideas; for the Chinese, it is easier to just steal, and this has become a part of their culture.

What brand of car do you drive?

I’ve always purchased a car from the big three. Over the past 27 years or so I’ve owned GM, Ford, and mainly Chrysler. But, then I found out my last Chrysler was made in Ontario Canada—not that Canada is a problem—a lot of great folks there—but here we’re talking about buying USA Made in order to support USA jobs. A friend of mine says this is OK since the corporate profits are returned the US. Well, maybe prior; but now Chrysler’s profits are returned to Fiat in Italy. What about the Japanese companies? Honda, Nissan, and Toyota all provide plenty of jobs in the US. Even some of the parts are made in the USA. I’m not too familiar with the European options, since the models I looked at prior were simply out of my price range—and just too small. And General Motors? There’s a growing number of people who understand what the bailout truly meant—that the rule of law was averted, in a display of fascism. Frankly, that is anti-American. That leaves Ford as the only one of the big three who is truly a Made in USA company. The problem with Ford is that, besides their trailing technology features, such as simple Bluetooth phone linking, three of my friends all own the flagship F series trucks. And all three have issues with their bottoms rusting out. The trucks are not even 8 years old. For the first time, I’ve decided that Japanese vehicles, made in the US, are best for my family. They seem to offer the best bang for the buck, and they provide jobs in the U.S.

Going Out of Their Way

Companies who do manufacture in China seem to be going out of their way to hide that fact. This can be because of the perception of lower quality Chinese goods, or that they recognize that folks are now paying more attention on how they are spending their money. The made in China drywall scandal and the tainted pet food scandals certainly don’t create a high quality perception. One example really illustrates this point. I few years ago I purchased a guitar effect pedal from a company called EBS. They are based in Sweden, and they make products that are among the best. I was surprised, when I read the certificate of origin for the pedal. Take a look at the picture, and it should be self-explanatory. Since the product was assembled and aligned in China, EBS was not allowed to apply their made in Sweden label. I think this example really helps point out and beg the question, what does a product that is “made in ABC” truly mean anymore? 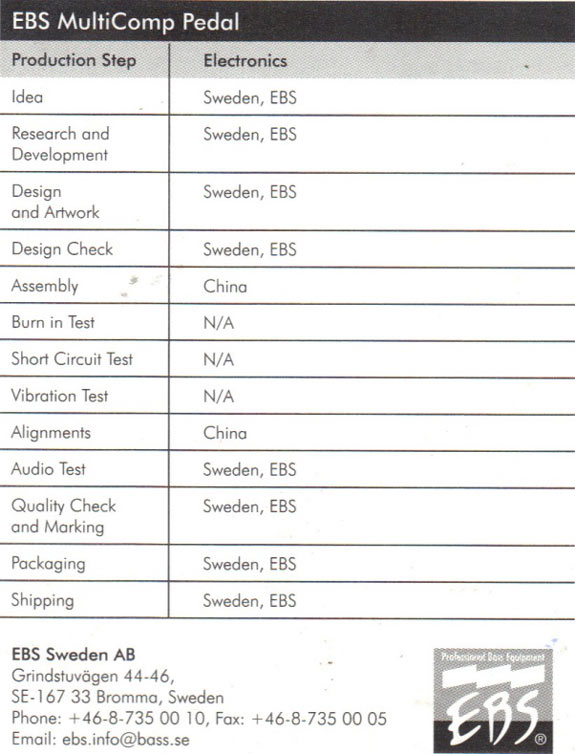 Does purchasing goods made In the USA really make a difference? Are we supporting local workers, or robots? Where are the corporate profits going? Is the manufacturer paying taxes? Are the products better regulated, and hence safer? Are the products of a higher quality? What is the overall value for us consumers? I think it boils down to each individual, and where they perceive the best overall value. For me, I try to buy made in USA whenever I can—but depending on the type of product, as much as I try, this isn’t always feasible.